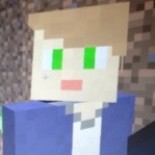 prmrytchr – thoughts around games and tech in a classroom

'The most important thing about technology is how it changes people.' – Jaron Lanier

Proteus as a Writing Stimulus

I wrote this excitable blog post the other week about an amazing virtual exploration game called Proteus. This afternoon, I was pleased to use it in the classroom for the first time.

As I mentioned, my intention for this game was to use it as a stimulus for writing. I had done a similar thing previously with the game Myst (based on the ideas of Tim Ryands, amongst others), but much of that had been teacher led. With Proteus I saw an opportunity for the children to participate purely in the exploration of the virtual world, without turning it into a long-term venture. (In the run-up to SATS I am eager to find enjoyable ways that allow the class to practise and improve the quality of their writing, rather than relying purely on previously-set writing tasks.)

Aside from the brilliance of Proteus, I’m still constantly impressed with the awesomeness of the internet itself as a way of making contact. Firstly, I was easily able to get in touch with the game’s author Ed Key, who was more than gracious about my plan to use the game in the classroom. In addition to this, I received a comment on my previous post from Darren Grey, linking to his Proteus-inspired poem. This impressively language-rich piece seemed perfect as a model for the type of descriptive prose that I was hoping to encourage the children to write. Darren was kind enough to give me permission to use this also.

So, before I introduced the children to the game (and indeed, without mentioning that we would be using a game) we began by reading Darren’s poem together as a class. I asked the children to think about the kind of place they felt the author might be describing. I then asked them to re-read the poem in pairs, highlighting any words or language features that they found particularly effective, or that they would like to ‘borrow’ for their own writing.

Discussing and annotating ‘In Proteus’ by Darren Grey

After this it was time to let the children loose in the game. Most children worked, as usual, with a partner – sharing a laptop or desktop. I gave each pair a note-taking sheet, which they used while playing the game to note down their ideas. I suggested that they should try to note down vocabulary relating to the senses, using a box for each sense. Proteus provides a very stimulating environment, with rapidly changing times and shifting seasons, and I therefore hoped that this would prompt a range of expansive vocabulary.

Taking notes during the game

It was interesting to be present while so many screens were displaying the game – there were fourteen computers, each at different locations on the island, along with the electronic whiteboard. The sound from the main computer was played over the speakers, filling the room with David Kanaga’s amazing reactive soundtrack. Other children used headphones. Most were glued to their screens, whilst a few stood back, taking in the view and noting their observations from multiple machines.

On the big screen

Used dual headphone splitters (from The Pound Shop!) to plug in two sets of headphones

Children explored with enthusiasm and excitement. They soon found their way on to the island and quickly discovered what was and wasn’t possible. A buzz went across the class when someone found something new – particularly the more mystical elements of the game, including the standing stones, ‘fireflies’ and the changes in season. The animals (bees, crabs, rabbits) were popular too. During play, children took screenshots of their favourite locations (pressing the F9 key creates a ‘postcard’ of a location that you can revisit again later):

Crabs on the beach!

Eventually, it was time to leave the game and turn some of their written notes into  something a bit more formal. (The level 5 skill below involved mixing features of different genres – the idea here was for the children to use some features usually used in poetry in a piece of descriptive prose).

Levelled objectives for the writing task.

Here are some examples of the writing produced by the children by the end of the session: 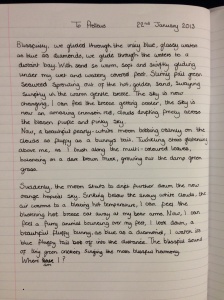 As the final stage in this writing process I intend to get the children to ‘up-level’ their own writing, producing a word-processed version of their text in combination with some of the images from the game. I’ll post some examples when we complete them.

[EDIT: See this new post for final pieces of work]

31 comments on “Proteus as a Writing Stimulus”

This entry was posted on January 23, 2013 by hairbyslice78 in games, proteus, virtual worlds, writing.

Error: Twitter did not respond. Please wait a few minutes and refresh this page.